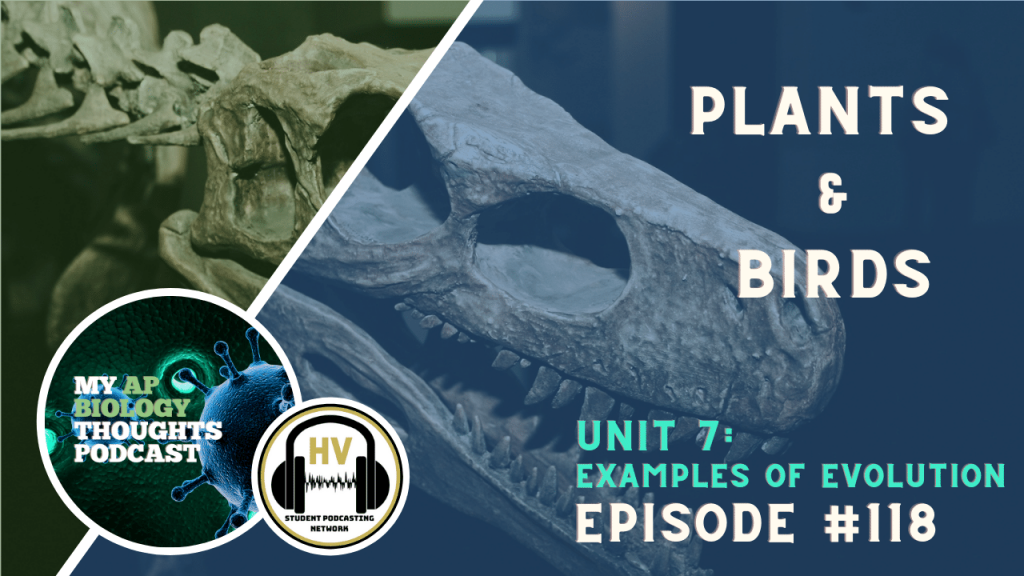 Welcome to My AP Biology Thoughts podcast, my name is Raelynn and my name is Samiyah and we are your hosts for Unit 7: Examples of Evolution – Plants and Birds. In episode 118, we will be discussing the plant Babiana ringens and how it has evolved to attract sunbirds.

Segment 1: Overview of Babiana ringens and evolution to attract birds

Segment 2: Evidence that supports the evolution of Babiana ringens to attract pollinators

Segment 3: Connection to the Course

Welcome to My AP Biology Thoughts podcast, my name is Raelynn and my name is Samiyah and we are your hosts for this episode on Plants and Birds. Today we will be discussing Babiana ringens – a flower that has evolved to grow upside down to attract sunbirds, with data from BBC, nerdfighteria, and the National Center for Biotechnology Information. We would also like to thank Botanist Spencer Barett from the University of Toronto and his team of researchers for their findings on this subject!

Babiana ringens, also known as rat’s tail, is a plant native to Cape’s Province, South Africa. It is a bright red perennial plant that flowers during the winter seasons (because it’s a rebel). This plant is pollinated mostly by Nectarine famosa, or the malachite sunbird, which is named after its striking and vivid colors.

Babiana ringens are known for their peculiar and unique shape. Unlike other plants, its stem dips downwards towards the ground while the flower remains right-side-up.

How did this plant species evolve to grow this way, and what role did the malachite sunbirds play?

German botanist Rudolf Marloth was the first to note that the Babiana ringens had seemed to evolve some sort of perch at their bottoms. To explore this odd phenomenon, botanist Spencer Barett from the University of Toronto, along with a team of researchers, conducted extensive research to understand the history behind the unique perches characteristic of the Babiana ringens plants.

They found that the plants in one specific geographic region only had one primary pollinator- the malachite sunbirds. The upside-down shape of the stem attracted sunbirds due to its efficient shape, which allowed the birds to land on the perch while simultaneously feeding on nectar. As a result, the Babiana ringens with the perches had a greater likelihood of being pollinated by the sunbirds, thus increasing their evolutionary fitness. The researchers continued their research by studying other Babiana ringens plants across South Africa in order to see if the trends were repeated in other locations.

They found that while the Babiana ringens in the first location had perches, those in the other locations didn’t. After studying these plants for a period of time, the researchers noted that while the main pollinators of the plants in the first location were limited to the malachite sunbirds, the plants in the other locations had a greater variety of pollinators. Their study found that “Sunbird visitation rates were positively correlated with perch length in the seven populations of B. ringens from which data on these parameters were collected” (see Table 1 and Fig. 4). As a result, they were able to conclude that the reason the plants in the other locations didn’t grow upside down with perches was because there simply weren’t any environmental pressures that they had to adapt to. In the case of the plants with the perches, they had to adapt to a limited selection of pollinators, and in doing so, evolved to grow upside down.

Connection to the AP Bio Curriculum:

These interactions between Babiana ringens and the malachite sunbirds demonstrate the concept of evolution and natural selection, from 7.1 and 7.2, in the AP Biology curriculum. The flowers with the perch possessed a greater fitness for the environment because its shape was more ideal for pollination. As a result, the Babiana ringens with the genes for the perch were able to both outlive and outpopulate those without perches. Over time, the gene for flowers without this stem faded away from the gene pool, and it became characteristic of Babiana ringens in certain areas to have upside-down flowers.

Thank you for listening to this episode of My AP Biology Thoughts! For more student-run podcasts and digital content, make sure that you visit www.hvspn.com. Thank you!

B;, de Waal C;Barrett SC;Anderson. “The Effect of Mammalian Herbivory on Inflorescence

Architecture in Ornithophilous Babiana (Iridaceae): Implications for the Evolution of a Bird Perch.” American Journal of Botany, U.S. National Library of Medicine, pubmed.ncbi.nlm.nih.gov/22615309/.

“Nerdfighteria Wiki.” The Plant That Grows Perches for Birds, nerdfighteria.info/v/0g2XDm1t12g/.

In episode 118, we will be discussing the plant Babiana ringens and how it has evolved to attract sunbirds.