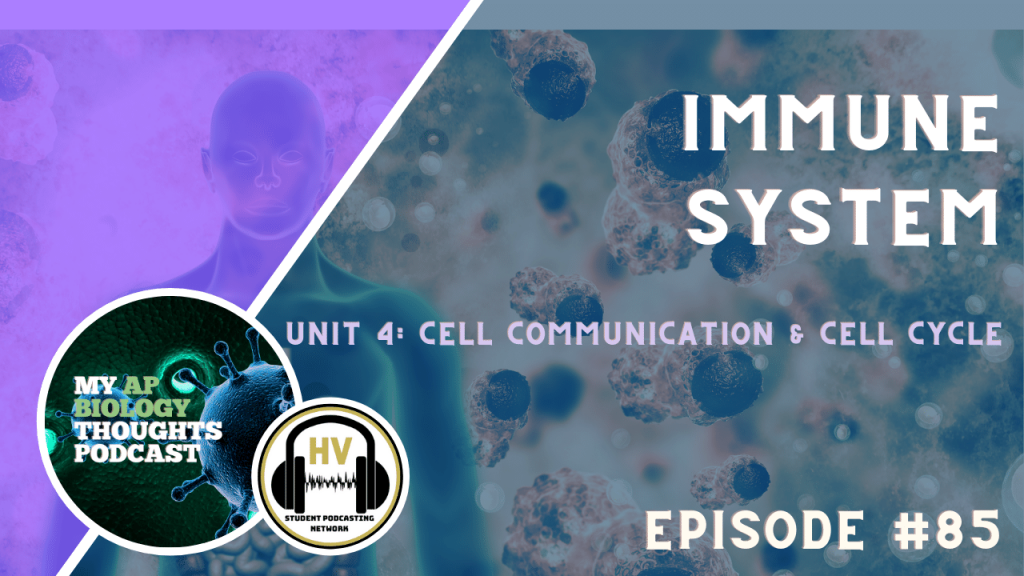 Welcome to My AP Biology Thoughts podcast, my name is Jacqueline Sun and I am your host for episode 85 called Unit 4 Cell Communication and Cell Cycle: The Immune System. Today we will be discussing how your body defends itself against infection and stays healthy through the complex yet vital immune system.

Segment 1: Introduction to The Immune System

Segment 2: More About The Immune System

Innate (Nonspecific defense system). As the name suggests, you are born with it and it is automatically activated in the face of threats.

SO HOW DOES YOUR BODY DETECT WHERE THE INJURY IS AND WHERE TO DEFEND ITSELF. IT uses the…

What are the actual lines of defense coming to defend the body from intruders and pathogens?

However, sometimes your body is facing a more pervasive, dangerous intruder or illness. In this case, the innate defense system is not sufficient for defense, which is where the adaptive (or specific) immune system comes in.

When the innate and humoral systems have failed and the cell themselves have been breached, cells must now fight within or among themselves to get rid of pathogens.

The key here is the T lymphocyte cell. T cells go after hijacked cells and cause inflammation, activate macrophages, and activate other T cells. T lymphocytes and other phagocytes in innate immune system engage in a specific process where after consuming the harfum pathogen, they will break the pathogen into small pieces and display them on protein grooves on surface of the cell.

Several different types of T cells: two most important are the helper T cells and the cytotoxic cells

Helper Ts: Can’t actually kill pathogens but will activate other cells that can

When the Helper T cells bind to the MHCs that have antigens compatible with the T cell’s antibodies, it will be activated and replicate rapidly, sending out warning signals known as cytokines to alert the immune system of a problem. These cytokines will often activate cytotoxic cells.

Segment 3: Connection to the Course

Thank you for listening to this episode of My AP Biology Thoughts. For more student-ran podcasts and digital content, make sure that you visit www.hvspn.com. See you next time!

Welcome to My AP Biology Thoughts podcast, this is episode 85 called Unit 4 Cell Communication and Cell Cycle: The Immune System.