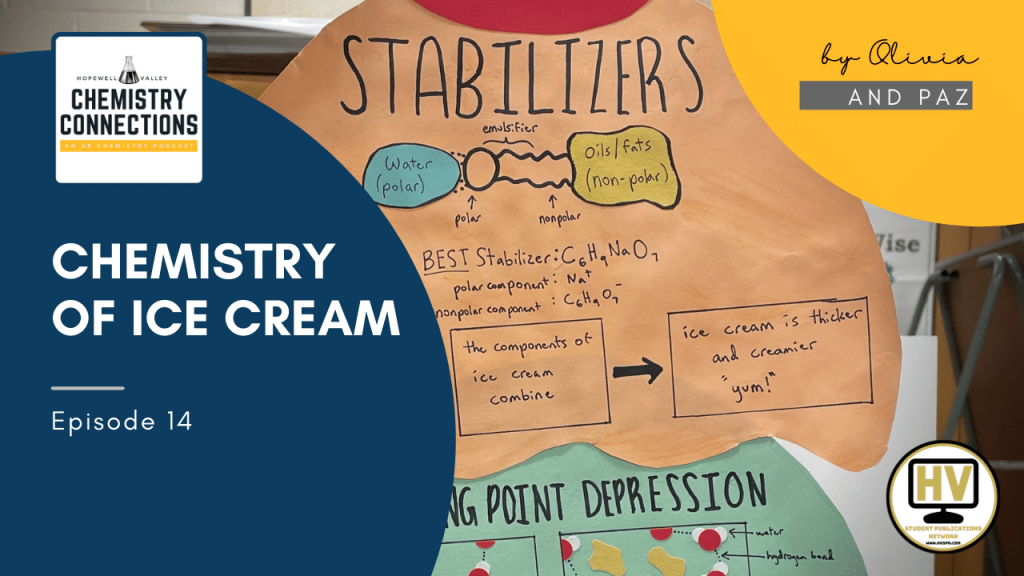 Welcome to Chemistry Connections, my name is Paz *and my name is Olivia* and we are your hosts for episode #14 called The Chemistry Behind Ice Cream Today we will be discussing how ice cream is made and stays cold.

I think we’ve all heard of ice cream, the cold dessert we have on hot summer days. A multitude of flavors including mint chocolate chip, strawberry, and the classic vanilla and chocolate. The creation of ice cream in its origins have been widely disputed but it reaches as far back as the second century B.C.. Important historical figures like Alexander the Great, Nero Caesar, and King Soloman enjoyed a cold treat similar to the modern ice cream many of us eat today. Today, the total frozen dairy production is over 1.6 billion gallons making it the most popular dessert in the United States; however, few people actually know the chemistry involved in sprinkle covered and cherry topped frozen treats!

Segment 2: The Chemistry Behind Ice Cream

The first topic we are going to cover today is stabilizers in ice cream. Stabilizers have many purposes, but one of the main ones is to increase the mix viscosity of ice cream, which means to thicken the mixture. This increases creaminess, helps the ice cream resist melting, and limits the growth of ice and lactose crystals during storage. Stabilizers help ice cream resist melting because as the viscosity increases, the rate at which ice cream melts slows. And stabilizers help limit the growth of ice and lactose crystals through a phenomenon called diffusion kinetics. As viscosity increases, the diffusion or movement of water molecules decreases and ice crystal growth slows. So, ice cream doesn’t have those crystals in its creamy mixture. Stabilizers also prevent a water sirum mixture from leaking out of the mixture while it melts and helps prevent shrinkage during storage, so ice cream is more enjoyable. The best stabilizer has proved to be .2% sodium alginate because this increases the viscosity of ice cream the most. The formula of sodium alginate is C6H9NaO7and it is a combination of sodium (Na) and alginic acid.

Stabilizers are a type of emulsifier, which are used to connect polar and nonpolar substances. Ice cream is made of milk, which is made of water, which is polar, and made of fats and oils, which are nonpolar. Emulsifiers are particles which are polar on one end and nonpolar on the other end. In sodium alginate, the positive sodium ions make up the polar end of the emulsifier. The sodium ions experience dipole dipole intermolecular forces with the water in the ice cream. The nonpolar alginate makes up the other end of the emulsifier. The alginic acid experiences London dispersion intermolecular forces with the oils and fats in the ice cream. Once the emulsifier connects the milk of the ice cream with the oils and the fats of the ice cream through intermolecular forces, the separate ingredients combine, thickening the substance as a whole and creating a creamier ice cream that is more enjoyable.

Thank you for sticking with us through all that chemistry talk! And thank you to Olivia for her wonderful explanation of sugar and hydrogen bonds in ice cream. Now, onto the fun part of the discussion.

We are interested in this topic because it is a part of our everyday lives. I don’t know about you, but I end up treating myself to some Ben & Jerry’s at least once a day. It is also important to us that we understand the chemistry behind the food that we both eat regularly. Although we only named two ways that chemistry and ice cream are related, there are actually many ways in which chemistry can define the properties that ice cream possesses. Also, these tips can help create an even better ice cream if any of our listeners would like to give it a try! Olivia, you brought in cupcakes today and cream puffs yesterday. Will ice cream be your next endeavor?

I’ll give it a try! And I’ll be sure to use a stabilizer and plenty of sugar to give you the best pint possible.

I look forward to it!

Learn about the chemistry of ice cream and making ice cream with your hosts Paz and Olivia.