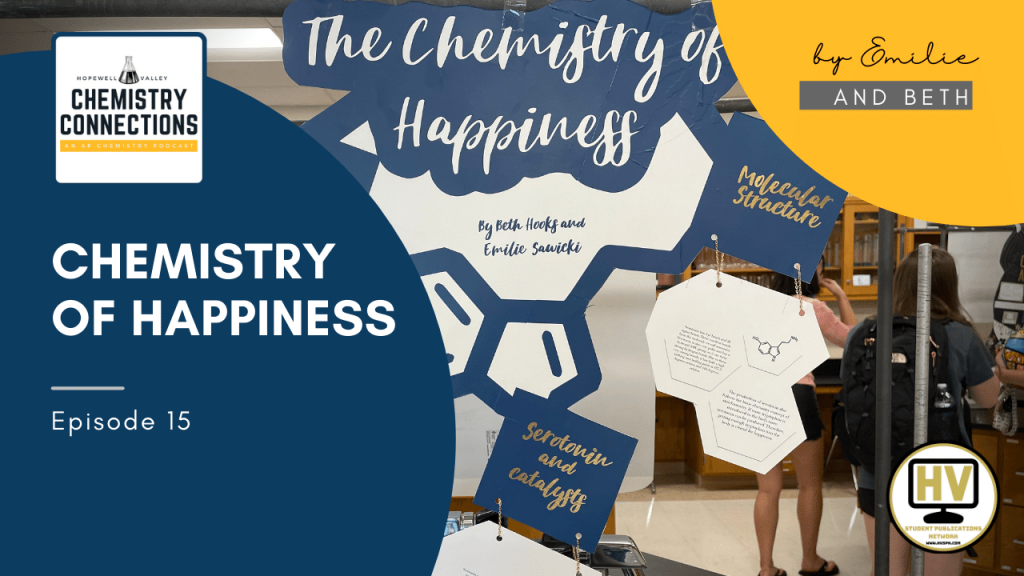 Welcome to Chemistry Connections, our names are Beth Hooks and Emilie Sawicki and we are your hosts for episode #15 called the Chemistry of Happiness Today we will be discussing serotonin and its effects on the brain.

Serotonin is a neurotransmitter found in the blood, the gastrointestinal tract, and the central nervous system. It acts as a neurotransmitter (substance that nerves use to send messages to one another) and a vasoconstrictor (causes blood vessels to narrow). It helps with stabilizing mood, regulating bowel movements, and allowing blood to clot.

A lack of serotonin in the brain is thought to have influence on mental illnesses including depression, bi-polar disorder, and anxiety. Because it helps balance mood, it is sometimes called the “Happy Chemical”.

Neurotransmitters transmit messages between neurons. Neurons are responsible for receiving sensory input from external sources, sending motor commands to our muscles, and for relaying the electrical signals. The interactions between these neurons and chemicals control many bodily functions, including emotional responses.

Segment 2: The Chemistry Behind Serotonin

Serotonin is also a very polar molecule, and has the ability to form hydrogen bonds between serotonin molecules because of the very polar hydroxyl(OH) groups. Hydrogen bonds occur when a hydrogen atom that is covalently bonded to an oxygen, nitrogen, or fluorine atom is attracted to a very polar oxygen, nitrogen, or fluorine atom on a separate molecule. Due to these strong attractions, serotonin has some interesting properties. It has a melting point of 167.5 degrees Celsius, which, compared to water molecules melting at 0 degrees Celsius, is reasonably high. It has a higher boiling point too, at 416 degrees Celsius. This means that at room temperature, it is solid.

When the covalent bonds are broken down, a byproduct is created. When doctors try to measure serotonin levels, they actually measure the amount of the byproduct created when the molecule is broken down. By using the ideas of stoichiometry, if there are more reactants, in this case serotonin, there will have to be more products, in this case the byproduct of serotonin. So, when someone has abnormally low serotonin levels, it is because they have less measurable byproducts. This is commonly linked to mental illnesses such as depression. Tryptophan is used in the production of serotonin, so not having enough of it will result in decreased levels of serotonin.

In the treatment of depression, bi-polar, and anxiety, it is common for patients to use synthetic serotonin. The blood-brain barrier is unable to be crossed by serotonin directly, so the reactants needed to produce it are often used instead in the form of dietary supplements. Synthetic products of serotonin are used to indirectly affect serotonin levels in the brain.

The production of this is similar to how our bodies get serotonin because serotonin is made from the essential amino acid Tryptophan, which our bodies can not produce. In order to make this, the use of enzymes are required which act as catalysts. Tryptophan 5-hydroxylase, an enzyme, is the catalyst for the rate-determining step. Catalysts increase the rate of reaction by providing a different pathway and lowering the activation energy of the reaction. In the biosynthesis of serotonin (5-hydroxytryptamine), energy is required to break apart the covalent bonds within the tryptophan reactant.

If the enzymes needed for catalysis are missing, less serotonin will be produced, so the introduction of these enzymes into the gut is needed to maintain a healthy balance of serotonin. This catalyst is introduced into the body by ingesting food. Certain foods have more tryptophan, which is the reactant needed in the synthesis of serotonin. By ingesting more foods that include this molecule, including but not limited to salmon, eggs, spinach, and milk, serotonin levels can increase. In a sense, this just means that eating certain foods will make you happier. Tryptophan is an essential amino acid, so it can only be introduced into the body by food. This is one reason that people with eating disorders have a higher probability of developing mental illnesses, including depression and anxiety.

Just like most people (I would assume), we want to be happy. Picking a topic surrounding the idea of happiness seemed interesting. However, most of our research ended up leaning in the opposite direction, towards mental health disorders and the lack of serotonin often associated with these conditions. While this isn’t as uplifting of a topic, it is definitely still very important. For example, one of the most common conditions associated with lower serotonin levels, depression, is diagnosed in 17.3 million American adults. This is only the number of people with a formal diagnosis, so the expected value is likely much higher.

With so many people struggling, learning about just one possible cause is important for gaining an understanding of mental health in general. We have struggled with mental health issues for over a decade, so we found this very interesting.  It may not have been the happy, cheerful route that we originally had planned, but that doesn’t make it any less valuable. And the Google searches of two juniors aren’t exactly going to make any breakthroughs on research of mental health, but the more that topics like this are studied, the closer we will get to finding a true cure for these awful conditions.