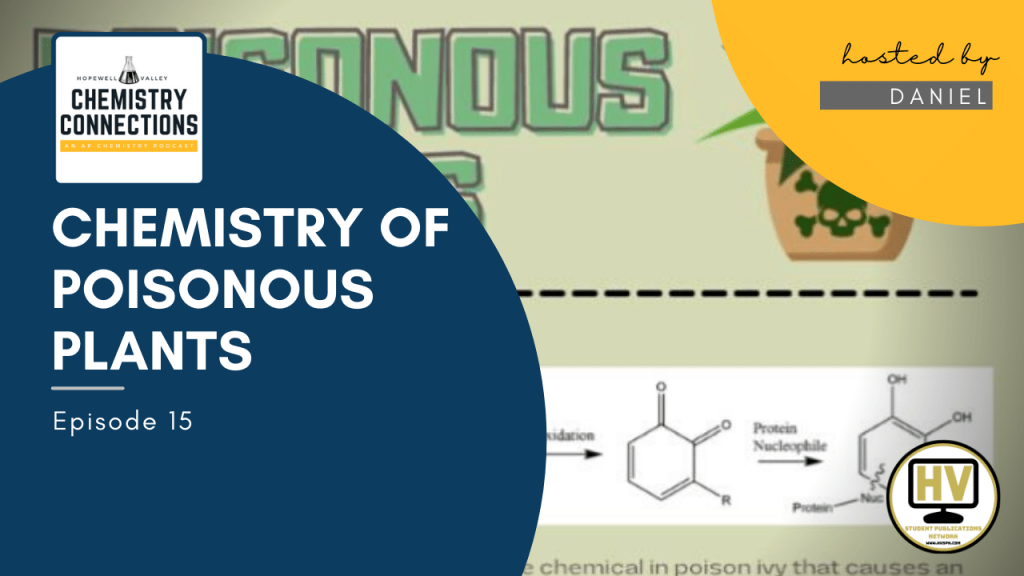 Welcome to Chemistry Connections, my name is Brian Chin and I am your host for episode 15 called Chemistry of Poisonous Plants. My name is Rey Riordan and I am also your host for this episode. Today we will be discussing various poisonous plants and how chemistry explains why they’re so dangerous.

So, let’s talk about some examples, starting with the water hemlock:

The stinging nettle is another extremely dangerous plant:

Segment 2: The Chemistry Behind Poisonous Plants

Rey: The topic popped into my head because my father gets hit by poison ivy very frequently after yard work. He constantly complains about the itch and the fact that there is no particularly effective way to treat it. This got me wondering why this was so, and what chemicals were involved in the reaction. In addition, I’ve never gotten a poison ivy rash even while doing similar yard work. Thus, I also wondered whether it was possible to be immune to the reaction-causing chemicals in poison ivy.

Brian: I became interested in this topic after researching more about poisonous plants. It absolutely boggled my mind that some of these tiny, seemingly harmless looking plants could do so much damage on human beings. After finding out that these plants could even cause death, I wanted to research how this could be so. In my opinion, this topic is important because people should be aware that poisonous plants exist and they should be careful when doing things like hiking.

Welcome to episode 15 called Chemistry of Poisonous Plants where we will discuss how chemistry explains why poisonous plants are so dangerous.