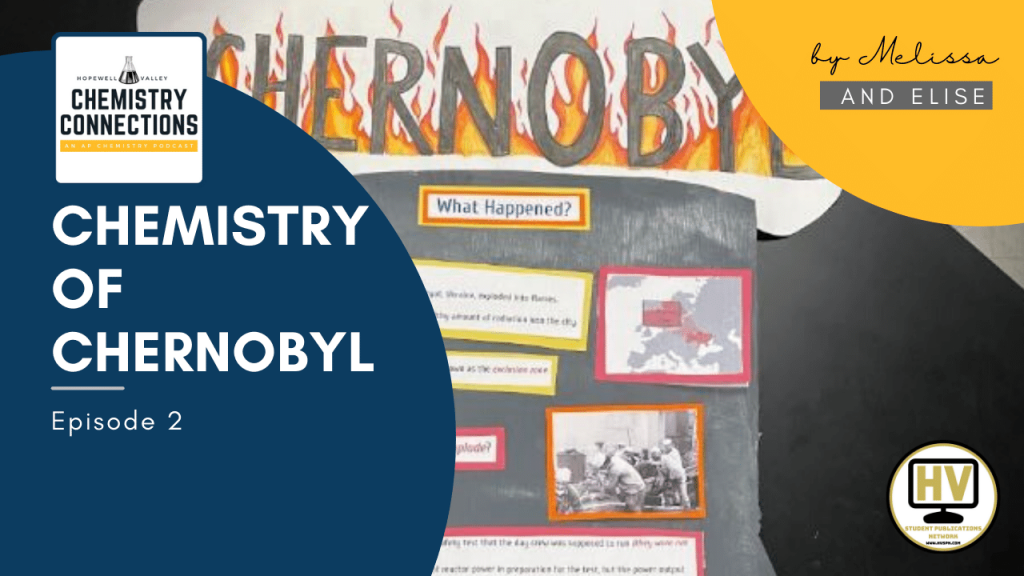 Welcome to Chemistry Connections, our names are Melissa and Elise and we are your hosts for episode 2 called The Chernobyl Disaster. Today we will be discussing the nuclear disaster in a city in Ukraine called Chernobyl.

The Chernobyl disaster was a nuclear explosion that occurred on April 26th, 1986 at the Chernobyl Nuclear Power Plant No. 4 reactor. The nuclear power plant was located near the city of Pripyat in the northern part of Ukraine, which was a part of the Soviet Union at the time. The explosion of Chernobyl’s number 4 reactor (RBMK-type reactor) released large amounts of radiation into the city. The area within a 30 kilometer radius of Chernobyl is now considered the Chernobyl exclusion zone. To this day, there are still areas in the exclusion zone where the radiation is far too dangerous for human contact. (talk ab how chernobyl is a tourist attraction and people can go see it)

Melissa: Isn’t there a tourist attraction where people can go to Chernobyl?

The Chernobyl disaster is the worst nuclear disaster in terms of cost and casualties. The initial emergency response alone involved more than 500,000 personnel, which included firefighters, engineers, military troops, police, miners, cleaners and medical personnel. The cost was around 18 billion Soviet rubles, which converts to 68 billion US dollars. 31 people died as an immediate result, but in 2005, it was predicted that as many as 4,000 people could eventually die from radiation exposure. (convo about how it’s almost impossible to calculate cost of lives)

Melissa: I think it’s really hard to calculate because I think there were lasting effects right?

*Elise talks ab some of the lasting effects*

Along with human deaths, countless animals were slaughtered in Chernobyl’s surrounding area in fear of their exposure to radiation.

Elise: Let’s look at some of the people who were involved in Chernobyl

Valery Legasov: The main chemist behind the investigation of Chernobyl and his work in its containment as well. He commit suicide ten years after the disaster, partly because he knew he would die sooner because of the radiation exposure. He had a set of audio tapes that he recorded before his death where he described his involvement with Chernobyl in full detail.

Anatoly Dyatlov: A Soviet engineer and deputy chief engineer for the Chernobyl power plant. He supervised the safety test that resulted in the Chernobyl explosion. He was the main person blamed for the disaster, as he did not follow safety protocols. (he did spend time in jail because it was mainly his negligence that caused the explosion)

Mikhail Gorbachev: leader of the Soviet Union at the time of the explosion

Boris Shcherbina: A Ukrainian Soviet politician who supervised the Chernobyl disaster. He had a really large role in allowing the investigation to receive the information and research that it needed.

coal miners & firemen: They were people considered the first responders in the incident. There were obviously firemen who were woken up in the middle of the night and had to go and put out the fire. They were heavily exposed to radiation and when they went to the hospital, they had to throw their uniform and equipment in the basement. To this day, the basement of the hospital is one of the most contaminated places and cannot be accessed due to its extreme radiation. (talk ab the scene in the docu maybe) Miners were brought in to dig a tunnel under the reactor to prevent the melting core from contaminating the groundwater. (which would put many lives at risk) It’s approximated that one out of four of the miners died later as a result of radiation poisoning.

Melissa: now that we know the people who were involved, let’s take a closer look at what happened in Chernobyl

Segment 2: The Chemistry Behind The Chernobyl Disaster

Now let’s look at what went wrong at Chernobyl. But first, let’s take a look at how a RBMK-type reactor, the kind at Chernobyl, works:

There are three components in an RBMK-type reactor which is the nuclear reactor used in Chernobyl. Uranium atoms, boron control rods, and cold water. The components can be broken down into 2 categories: things that increase reactivity and things that decrease reactivity. To start, uranium atoms split apart through a process called nuclear fission. Nuclear fission is when neutrons collide with uranium atoms and cause them to split. This releases a large amount of energy making it an exothermic reaction.

Elise: Exothermic reaction is something we covered in chem this year. CHEMISTRY CONNECTION

This whole process increases the reactivity of the core and if the reactivity isn’t balanced by an external source, it will continue to rise exponentially. This is extremely disastrous as xenon gas is a product of this reaction and is extremely poisonous if it is not burned off and it typically is when the reactor is working under normal conditions.

Elise jumps in: In Chernobyl’s case, the reactor wasn’t working under normal conditions which means there was a build up of poisonous xenon gas

So essentially the uranium atoms split apart which increases the reactivity. To lower the reactivity, boron control rods and cold water are used.

Elise: It’s like a cycle when you think about it. Each component needs to work together in order for the reactor to work as it should.

Right, so when there are many moving parts in the reactor the question that comes to mind is what actually happened in Chernobyl, what went wrong?

So what actually went wrong at Chernobyl?

The reactor exploded in the early morning, at around 1:23 AM. That night, the night crew was running a safety test, something that had been continuously put off for a few days.

Melissa: Automatic red flags right there since there were people who were running the test who were not trained to do so

There was a planned decrease of reactor power in preparation for the test, but the power output unexpectedly dropped to near-zero. Operators were not able to restore the power plant’s needed power level for the test, causing the reactor to be unstable. At this point, reactivity in the core had been rising, but all of this happened with Dyatlov thinking there was a foolproof fail-safe, AZ-5. Under normal conditions, engaging in AZ-5 immediately causes the boron control rods to enter the core and decrease reactivity. However, the control rods were tipped with graphite, (didn’t get to the boron part of the control rod) which caused the already rising reactivity in the core to soar. Ultimately, causing the core the melt down and explode and erupt into flames.

This topic was interesting to us because it’s the worst nuclear disaster in history and so naturally, we’re curious about what actually happened. There’s an immense amount of chemistry behind the workings of a nuclear power plant and that coupled with the tragedy of the Chernobyl No. 4 reactor piqued our interest.

Welcome to episode 2 called The Chernobyl Disaster. Today we will be discussing the nuclear disaster in a city in Ukraine called Chernobyl.