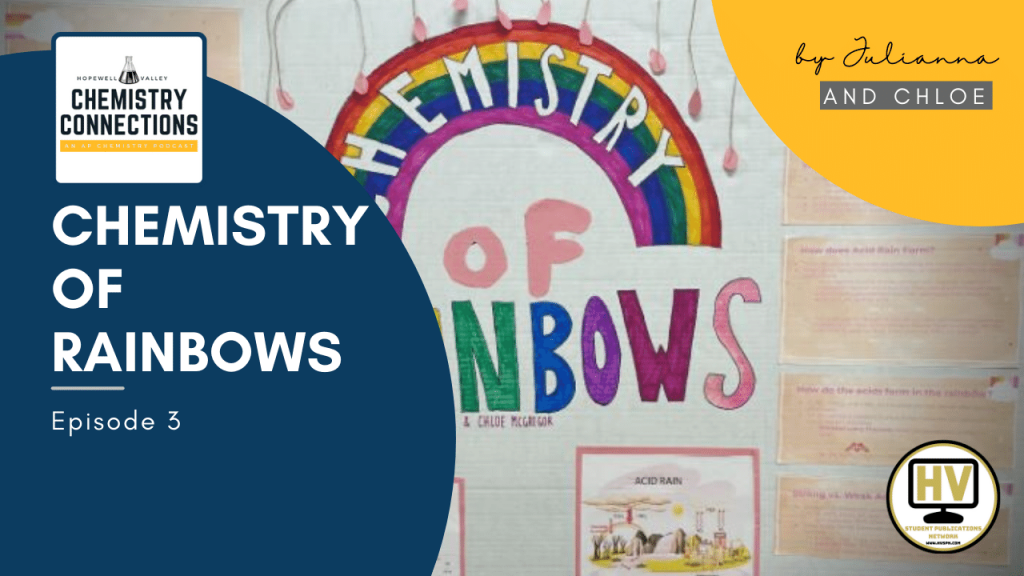 Welcome to Chemistry Connections, our name’s are Julianna Silva and Chloe Mcgregor and we are your hosts for episode #3 called the chemistry behind rainbows. Today we will be discussing exactly how rainbows occur after a storm, how the wavelengths of each color work together, and how acids and bases cause acid rain to change the appearance of a rainbow.

Have you ever wondered how exactly rainbows occur after storms? It is instinct to run outside after a storm to look at rainbows. But why exactly do these beautiful rainbows occur?

Throughout this first segment, we will be going over the basic components of a rainbow, and exactly how the water and sunlight work together to expose the 7 individual colors of the rainbow.

Segment 2: The Chemistry Behind Rainbows

To the human eye, the light that comes from the sun appears to be white. However, this white light is actually composed of the 7 wavelengths of color. A wavelength is the distance between successive crests of a wave, especially points in a sound wave or electromagnetic wave.

Each color is unique to its wavelength. The color red has the slowest and longest wavelengths while violet, on the opposite side of the rainbow, has the shortest and fastest wavelengths. When all of these wavelengths are together, they produce the normal, visible white light.

The electromagnetic spectrum consists of an array of wavelengths that produce a variation of radiations such as ultraviolet, infrared, radio, gamma rays, and x-rays.

One of the main reasons why wavelengths are separated when they hit water is because water is much denser than air. The density of water causes the separation of the electromagnetic spectrum. Also visible to the human eye is the curvature of a rainbow. After a storm hits, there is only a certain amount of water droplets suspended in the atmosphere. As the sunlight hits these specific droplets, a curved rainbow can be observed with respect to the curvature of the earth.

Not only does sunlight interact with rain water, but it also interacts with acid rain.

As we know, rainbows can come in many different sizes and are all unique to one another. The size in particular is determined by the makeup of the water droplets and scientists determine if there are chemicals in the atmosphere by simply observing it.

In particular, acid rain reacts differently with the sunlight as it passes through, resulting in a rainbow with a larger radius. Acid rain results when sulfur dioxide and nitrogen oxide are present in the atmosphere and get absorbed in the precipitating rainwater. The acid then has a different refraction and the interaction with water molecules together contributes to the change in rainwater and the angle with respect to sunlight that the rainbow is observed. The angle at which the rain interacts with the light can be used to estimate the pH value of the rainwater.

Welcome to episode #3 called the chemistry behind rainbows. Today we will be discussing exactly how rainbows form and how acid rain has an impact.