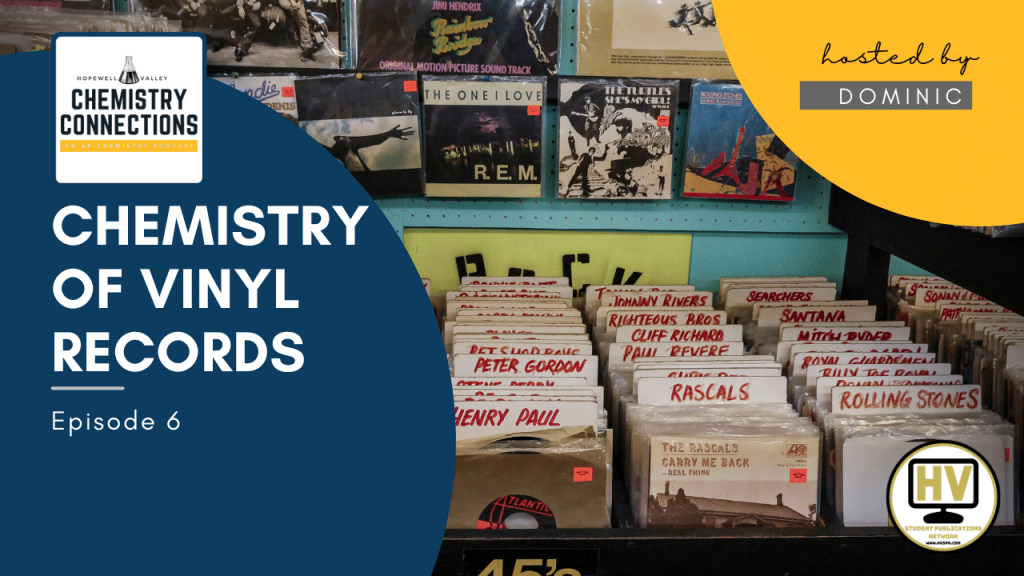 Welcome to Chemistry Connections, my name is Dominic Chila and I am your host for episode #6 called Chemistry behind Vinyl Records Today I/we will be discussing The history of Vinyl records, how they are made, and how the sound is created.

Vinyl records have been around for almost a century and still continue to grow in popularity.

In the 1930’s they began as a way to share the love of music with one another and it blossomed into millions of people collecting vinyl records in order to preserve the original sound of the music as the world became digitalized.

When cassettes, cds, and mp3s came around many people decided the age of vinyl had come to an end and went fully digital. After decades of digitalized music became the go to form of music, vinyl saw a resurgence in the late 2010s. January of 2017 had the highest number of vinyl records sold in one month since 1991. 2017 marked the tenth consecutive year of vinyl growth, partially thanks to indie rock, the emergence of more record stores, and the novelty of the format. Today, vinyl records continue to grow in popularity.

Segment 2: The Chemistry Behind Vinyl Record

In Todays podcast I will walk through how vinyl records are made as well as how they are able to produce sound.

The turntabe is able to create sound through the record with the use of energy. When a record spins, it creates sound energy in the form of vibrations that get converted into electrical energy signals. These signals are fed into electronic amplifiers. Electric amps vibrate and feed the resulting sound into speakers, which amplify it and make it louder.

You may be asking yourself, how does this relate to chemistry. Well you see, those electrical signals are transferred through the internal wiring. The wiring is made of metal which has free-flowing electrons that actually allow the charge to flow through to the amplifiers. Let me explain, the metal used, let’s use copper, is able to conduct electricity due to it’s properties as a metal and it’s bonding. Metallic bonding is very important for conducting electricity because of the free electrons involved. Unlike other bonding, metallic bonding does not bond the electrons to the atom. This “sea of electrons” is able to allow electrical currents to pass through it.

The vinyl record first stood out to me while I was in my basement and stumbled upon a collection of them that belonged to my dad. I set out and bought a brand new record player and listened to the ones I had found.

Ever since I have been collecting vinyl to listen to at numerous stores, yardsales, and online.

I think it’s important to keep vinyl records around because even tho times are changing very fast, it’s always good to remember the past and keep nostalgic items in your life.

Welcome to episode 6 called Chemistry of Vinyl Records. Today I will be discussing The history of Vinyl records.