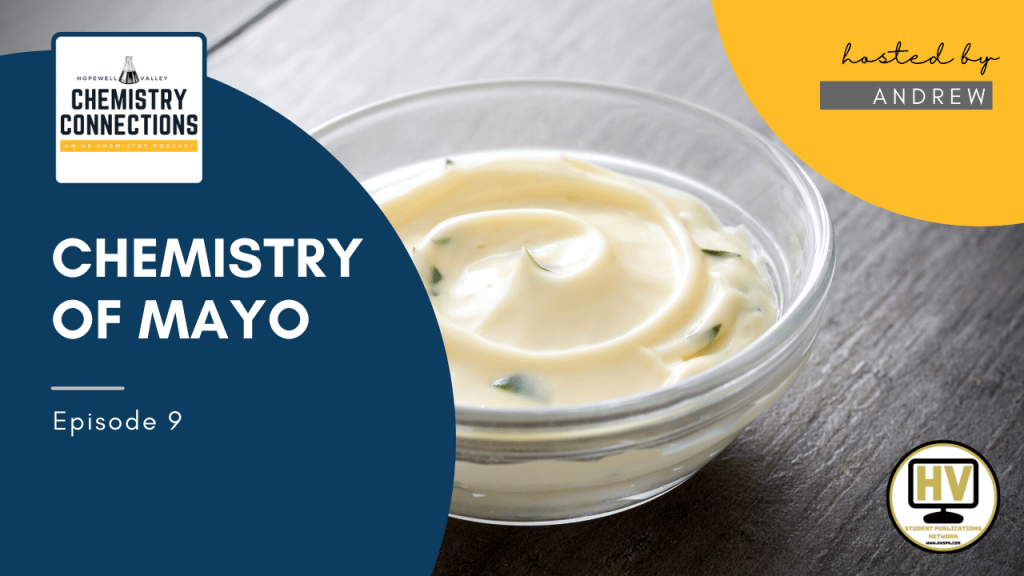 Hello, and welcome to Chemistry Connections episode #9. I’m your host Andrew, and today we’ll be discussing the chemistry behind mayonnaise.

Let’s get started by defining what mayo is. Mayo is made of oil, egg yolks, and a water-based acid like vinegar or lemon juice. Mayo is also an emulsion, which is a mixture of immiscible fluids – ones that do not dissolve in one another. This is achieved by finely dispersing one liquid into tiny droplets that are suspended in the other liquid, but emulsions last only temporarily. The most common emulsions that you’ll see on a daily basis are between oil and water. Emulsions between oil and water include milk, butter, and ice cream – each one has a stable balance of water and fat, which normally do not mix.

Segment 2: The Chemistry Behind Emulsions

Oil, at the molecular level, is a substance called a triglyceride. Triglycerides are formed from glycerol and three fatty acids. These fatty acids are long chains made of carbon and hydrogen atoms, making triglycerides nearly nonpolar. On the other hand, we know that water molecules, or H2O, have a high net dipole moment because of the difference in electronegativity of the hydrogen to oxygen bonds. The oxygen atom in a water molecule has a partial negative charge, while the hydrogen side has a partial positive charge.

You probably know that oil and water don’t mix, and when you try to mix them together in a cup, the oil will rise to the top. We can explain that through the intermolecular forces that exist between each type of molecule. Nonpolar oil molecules will form London dispersion forces. Water molecules will experience hydrogen bonding due to the especially high electronegativity difference across the O-H bond. When we try to mix them, the solute-solvent interactions that form are dipole-induced dipole forces, but these aren’t strong enough to break the solute-solute or solvent-solvent interactions, so we don’t observe solubility.

This is where emulsifiers come in. These substances stabilize the suspension of little oil droplets in water, or vice-versa, so that they do not separate as quickly. Emulsifiers have two ends, allowing them to form a bridge between the two insoluble liquids. One portion is called lipophilic, or oil-attracting, and it is nonpolar, often made up of a hydrocarbon chain. The other end is called hydrophilic, or water-attracting, and it is polar or ionic. The hydrophilic end will form intermolecular forces with water molecules, which can be either ion-dipole or dipole-dipole, that are strong enough to overcome the hydrogen bonds, while the lipophilic end forms London dispersion forces that overcome the forces between oil molecules. When this happens, the emulsifier molecules will form physical barriers around droplets to prevent them from coalescing and breaking the emulsion.

Now that we know the chemistry behind emulsions, we can return to the food that brought us here in the first place: mayo. Mayo has always fascinated me in how it is made, turning liquid ingredients into a thick, spreadable condiment. The principles of intermolecular forces are at work here too!

In mayo, the water comes in the form of lemon juice or vinegar. You mix the liquid acid with egg yolks, which provide the emulsifier. Egg yolks contain lecithin, which are a type of phospholipid, or emulsifying molecule. When you slowly stream in oil, whisking quickly disperses the oil, and the lecithin molecules’ hydrophilic and lipophilic ends work to stably suspend the oil droplets. Eventually, you end up with creamy mayonnaise. By adding more liquid oil, you in fact make the mixture thicker because it becomes much more difficult for the water molecules to flow as they surround the oil droplets.

Hello, and welcome to Chemistry Connections episode #9. I’m your host Andrew, and today we’ll be discussing the chemistry behind mayonnaise.