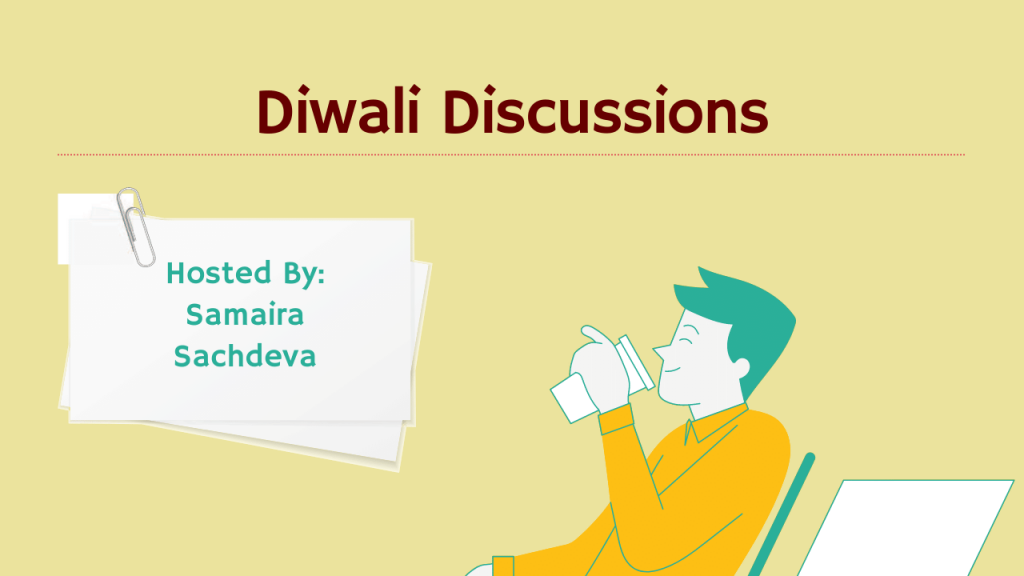 Show Name: A Day in The Office

You are listening to A Day in The Office the podcast with your host(s) Samaira Sachdeva.

Segment 1: Summary of the Diwali episode

In this episode of the third season, Kelly hosts a Diwali party and invites everyone from the Dunder Mifflin Paper Company office. (including her boss Michael, which if you don’t already know, is an immature, self-centered, comedic, and a clueless person.) Of course, Michael is thrilled and excited to go, because why wouldn’t he be? He is an extreme extrovert. Along with this, he brings along his girlfriend Carol who was under the impression that it was a costume party because that is what Michael told her, so they both showed up in a costume. Carol, of course, was embarrassed when she dressed up as a cheerleader when she was surrounded by people in Saris. Along with the embarrassment that Carol was already facing, Michael got a little ahead of himself and decided to propose to her at the party, in front of all of his coworkers and Kelly’s friends and family, when it had only been their third date. Meanwhile, Kelly’s parents are interrogating Ryan (kelly’s boyfriend) about his life goals, and when Ryan responds with “traveling” and “buying an Xbox”, her parents begin to pressure Kelly to marry an Indian doctor, which of course, is the perfect person according to Indian parents everywhere. Now, going back to Michael’s proposal, Carol said no because as I mentioned earlier, it had only been their third date. I mean, who proposes on their third date? If I were Carol, I would’ve said no, too. Michael became very sad and goes to Pam, who was dealing with her own troubles. Pam had just gotten out of a three-year engagement, and the guy she liked, Jim, just moved away to Stamford for a new job opportunity, while they all live in Scranton, Pennsylvania. To shorten this up for you, Michael says that he and Pam are “both victims of broken engagements” when Michael was never engaged, and so he tries to kiss Pam. She obviously refuses, which led Michael to go back inside and in order to cheer his and everyone else’s spirits, sings a song honoring the celebration of Diwali, which is the concluding scene of this episode.

Segment 2: How I relate to this episode of The Office

So now you’re probably wondering about how I, personally, can relate to this up and down episode of The Office. For starters, I am Indian, similarly to Kelly, and I also celebrate Diwali. Every year my family and I love to celebrate together and go to Diwali parties. I am also really excited to say that this year will be the first time where we have a day off from school in honor of Diwali! If you ask me, this is very long overdue, but honestly, I am just glad that we are finally getting a chance to celebrate on our own time, and people being understanding of that. As I said, my family and I also go to Diwali parties, and if we don’t we love to celebrate ourselves! One time in particular when I went to a Diwali party at my neighbor’s house, this was around the time when I had just started watching The Office for the first time, I thought it was so funny when this group of teenagers decided to sing the exact song that Michael sang in the Diwali episode, at the party. I thought it was so cool because I knew what episode they were singing from, and what they were talking about, and I thought it was so funny and hilarious because I was like “Haha! I know what you’re talking about!” which I wouldn’t have known had I not watched the show. Also, something that I didn’t mention when summarizing the episode of the show was that when Michael asked Kelly about what Diwali is, Kelly said that she didn’t know. To me, it seems that Kelly doesn’t have much knowledge about her culture or about Hinduism, and honestly, I am kind of the same way. Although I love my culture and all of the fun and different holidays, I can’t say I know much about it. I do know, however, what Diwali is. I assume that you’re probably wondering what this whole episode is even based on, so let me tell you what I know about the holiday. Diwali is the festival of lights, a festival where we celebrate good over evil and light over darkness.

So as I said, Kelly, similarly to me, is Indian. The actor who plays Kelly is Mindy Kaling, and she has acted in some amazing movies like A Wrinkle in Time, Ocean’s 8, Late Night, and much more. She has also directed her own Netflix Original series, called Never Have I Ever, which centers around an Indian American girl, and her high school experiences. Mindy Kaling is the first Indian American to have her own network show which is so, so cool and I think she has become a new representative for Indian American girls everywhere. Going back to The Office, in the show, her character Kelly, dated a guy named Ryan, who also works with her. Even though the show ended back in 2012, Mindy and the actor who plays Ryan, B.J. Novack, have been very, very close off-camera and over the 7 years of filming. So much so, that B.J. is the godfather to Mindy’s kids. Also, Novack and Kaling actually produced many of the episodes of The Office, which could definitely take part in how close their friendship has always been. Some other actors of The Office such as Steve Carell who plays Michael and John Krasinski who plays Jim, have become so well known and famous. Steve Carell has acted in Beautiful Boy, Crazy Stupid Love, Welcome to Marwen, and was the voice of Gru from Despicable Me. Meanwhile, John Krasinsky has starred in A Quiet Place One and Two, and Tom Clancy’s Jack Ryan.

A Day in The Office is a student-run podcast that takes a deeper look into episodes of a comedic mockumentary, The Office.

Tagged A Day in the Office