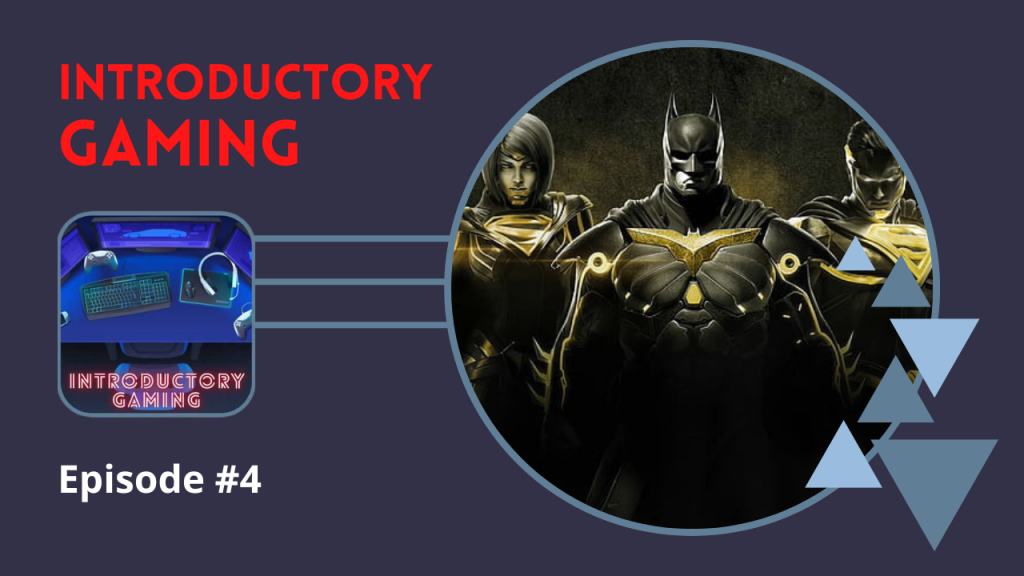 Hello, my name is Duke and you are listening to the Introductory Gaming Podcast. We are proud members of the Hopewell Valley Student Podcasting Network found online at hvspn.com. The opinions expressed in this episode are those of the host only, not of HVSPN or Hopewell Valley Regional School District. Please enjoy the show.

You are listening to the Introductory Gaming podcast with your host(s) Duke and Yash.

In this episode of the Introductory Gaming Podcast, we will be discussing a really popular superhero game. If you haven’t already guessed, we’re going to talk about DC’s take on a fighting game, Injustice 2. This podcast will detail what the game is about, and the fundamentals of how to play, and we will even be doing rounds of trivia. This podcast will only cover the second installment of the game. For this episode, we brought in a student guest, Anish Ponam.

For our first segment, we’re going to give a brief overview of the game Injustice 2. Injustice 2 released on May 11, 2017. This game, similar to Mortal Kombat, was made by NetherRealm Studios. Injustice 2 is a fighting game with a superhero twist on it. The game has a roster full of characters from the DC universe, and it even has some guest characters from the Mortal Kombat franchise. You can find your favorite superheroes from Batman to Superman, and for more hardcore fans, you can find obscure characters like Doctor Fate and Atrocitus. Every character has a list of moves that you can perform when battling. This game has a unique factor to it. It has a customization slot where you can equip gear for your favorite characters. Each character has hundreds of gear pieces unique to them, but you just have to unlock them. The gear is great because you can transform your character to make them look completely different and give them a new style. This gear also has a combat advantage as it increases or decreases certain attributes of the character. You can play this game with your friends in the multiplayer section. If you happen to be playing alone, you can play against the AI or even indulge in the story mode. While playing solo, you can also play in a place called the Multiverse where you battle many bosses to get really overpowered rewards.

In this segment, we will be playing a minigame with our guest. The minigame that is featured in this episode will be trivia. Yash will go through a series of questions, and Anish and I compete to get the correct answers. The person with the most points at the end of this segment will be the winner. The twist is that bonus points will be rewarded through a series of challenges. For the people who are listening, feel free to answer the questions with us and see how extensive your knowledge is about Injustice 2.

Before I proceed with the questions, I want to know what characters you main.

In this segment, we will just voice our opinion of the game.

—Rate it or Hate it

Well that’s it for our episode, tune in next time where we talk about sports games. See you in the next episode, buy bye.

1. Without looking at the shownotes, when was Injustice 2 created?

2. Which Robin is featured in the Injustice 2 game?

3. Who is my personal favorite character from the game?

4. Which character can only be unlocked when completing the story mode?

6. What is the name of the person who is stuck inside Firestorm’s body?

7. Which one of these characters was a DLC?

8. What is the name of the empire where Black Adam is from?

9. What is the name of the item which you open to get gear?

10. In a piece of legendary gear, what does the attribute boost total add up to.

About the author, Yash