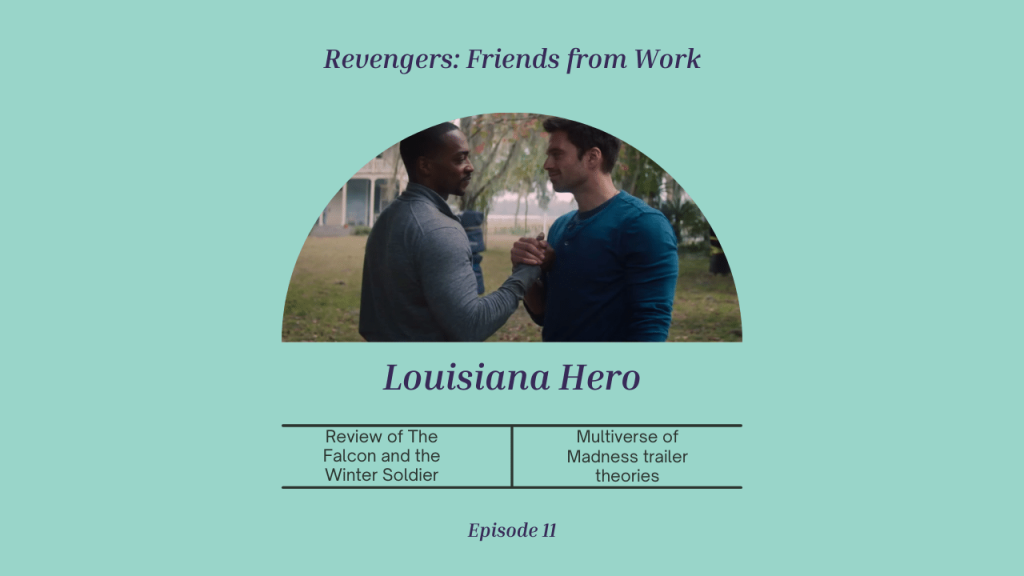 Check out the latest episode of #revengersfriendsfromwork the podcast on hvspn.com!

You are listening to Revengers: Friends from Work, the podcast with your host(s) Christina Zelin.

In this episode of Revengers: Friends from Work the Podcast, I will be discussing: The Falcon and the Winter Soldier. This is the second episode in a mini series where I will talk about each of the TV shows and movies of 2021. At the end of this episode, I will briefly go over the new Multiverse of Madness trailer that aired during the Super Bowl, so stay till the end to hear my thoughts on it.

Sam and Bucky trying to figure out a world without Steve, and how to properly pass along the mantle. The duo also has to put a stop to Karli and the Flag Smashers who are recreating the Super-Soldier Serum. This show also directly deals with the issue of racism in America.

Sam originally thought that he was doing the right thing by giving up the shield for two reasons: He felt like no one else could be Captain America other than Steve, and even if he were to become Captain America, he wasn’t sure if people were ready to accept that a Black man could be Captain America. Throughout the show, Sam starts to realize that he is going to be Captain America, whether people accept him or not, he is going to be the one to break the barrier. Bucky was still having nightmares about the things he did as the Winter Soldier, so his therapist tells him to try to make amends with the people he has wronged as the Winter Soldier. It doesn’t really help, and finally with Sam he get’s some tough love. Sam tells him that if he wants the nightmares to stop, he has to do the work and actually be of service to people, then and only then will he start to feel better.

I liked this show, the villain for the show wasn’t the best, but that wasn’t really the point of the show, none of these shows have the sole purpose of fighting a villain, that’s what the movies are for. These shows are all about setting things up for the future, and they have to have a conflict, hence the villains. The purpose of this show is to see Sam and Bucky evolve into their new personas, Sam finally becoming the new Captain America, and Bucky leaving his days as the Winter Soldier behind and becoming the White Wolf.

In episode 11 of Revengers: Friends from Work the Podcast, I will be discussing: The Falcon and the Winter Soldier.