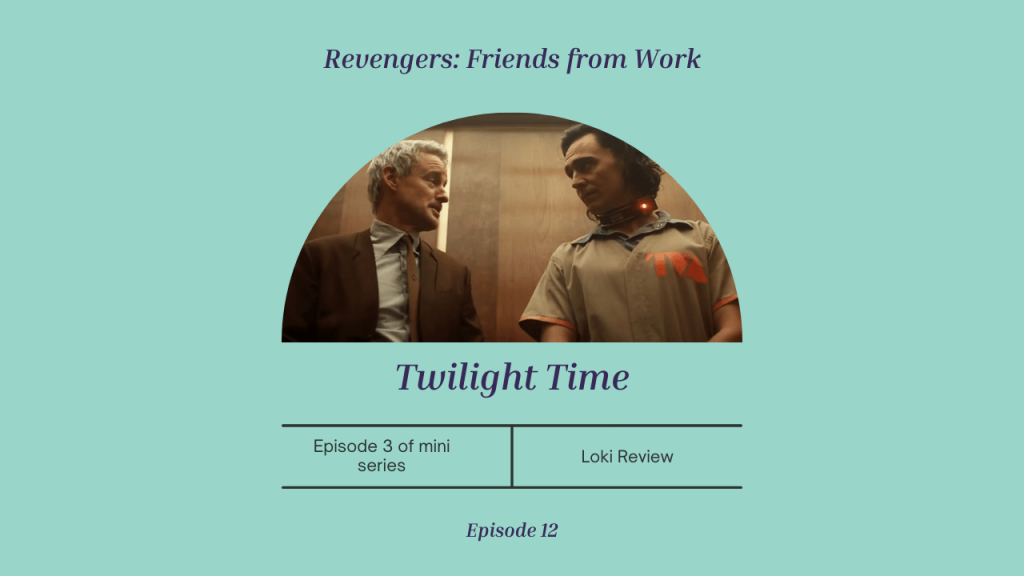 You are listening to Revengers: Friends from Work, the podcast with your host(s) Christina Zelin.

In this episode of Revengers: Friends from Work the Podcast, I will be discussing: Loki. This is the third episode in a mini series where I will talk about each of the TV shows and movies of 2021.

Loki and a variant of him, Sylvie, try to figure out who is behind the organization known as the “TVA” and bring them down. Loki tries to figure out who he really is, and what his destiny is in life, and it takes him on a journey to learn about self-love. Sylvie is trying to get revenge on the people who ruined her life by kidnapping her as a child. The relationship between Loki and Sylvie: why? At first, I enjoyed the fact that Loki actually was willing to open up to someone and actually love somebody, but then that quickly faded away once reality hit me and I realized that he basically is in love with himself.

Loki watching all the events of his life, seeing his mother die because of him, and seeing how he dies. Loki coming out as genderfluid. Loki and Slyvie about to die, reflecting on what it means to be a “Loki”. Mobius telling Loki that he can be whoever he wants to be, even someone good. Sylvie killing Kang and opening up the Multiverse.

Loki went through some major character development in this show, but it didn’t really matter that he did because we know he died in “Infinity War”. In the beginning of the show, Loki is being his mischievous self, stealing things, having a god complex, and by the end of the show, he’s thinking things through, and was being kind to people. Even though he didn’t get along well with Mobuis in the beginning, he called him a friend and gave him a hug and wished him well. MENTION 2012 LOKI Sylvie was taken by the TVA as a young child because she wasn’t even supposed to exist, probably because she was a girl. Even though she wasn’t a man, she was still as sly as any other Loki is, and made her escape from the TVA and has been on the run ever since, hiding in apocalypses to evade being found. She was made out to be the villain at first, but soon turns into the hero who helps Loki discover who is behind the TVA. Once they find the man in charge, Sylvie’s rage takes over her, sending Loki back to the TVA so there is nothing stopping her from killing Kang.  Mobius was the comedic relief of the show, and he played his part beautifully. Once Loki was told the truth about who the workers at the TVA really were, he tried to tell Mobius that he had a life before coming to the TVA, but he refused to listen. Once things were starting to click in his head, Mobius realized that he actually was a variant. This helped in his decision to turn on the TVA. Renslayer was a good friend to Mobus in the beginning, she stood up for him with the Time Keepers, and they shared everything with each other. Once Mobius found out who he really was, Renslayer had no choice but to turn on her friend and prune Mobius. That was when we discovered that she was one of the villains, but by the end of the show when she realizes that the time keepers aren’t real, she goes off to discover the truth herself.

I liked this show, I know a lot of people didn’t because of the love interest, but I enjoyed it. We got to find out how someone becomes a variant, and what happens to the Sacred Timeline if something isn’t done to fix it. With the multiverse now open, there are endless possibilities as we see in the final shot for this season when Loki is thrown into a different universe where Kang got what he wanted. I’m excited to see what season 2 has in store for us, so we’ll have to wait and see.

In this episode of Revengers: Friends from Work the Podcast, I will be discussing: Loki.