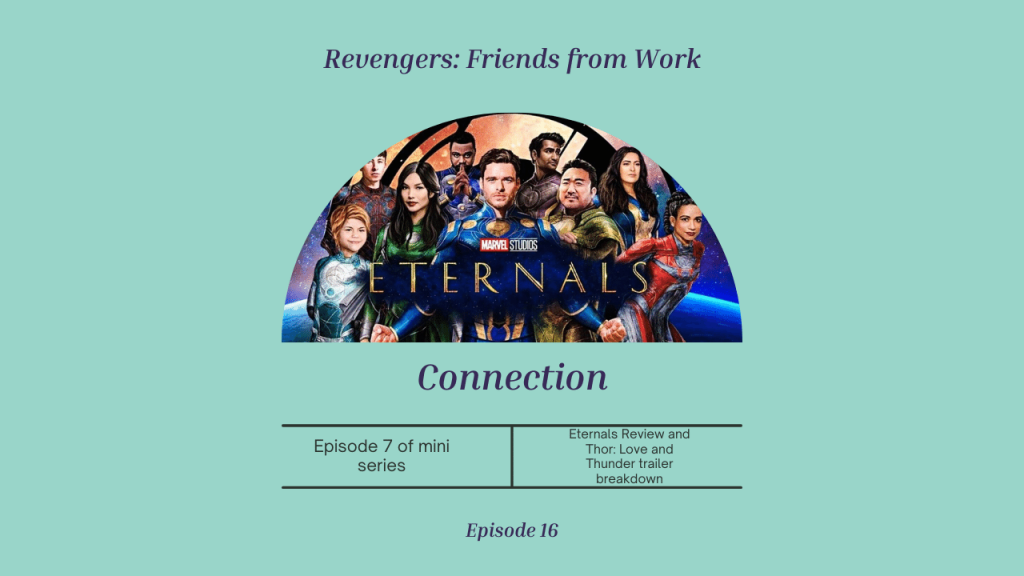 In this episode of Revengers: Friends from Work the Podcast, I will be discussing: Eternals. I will also go over the first Thor: Love and Thunder trailer that came out. This is the seventh episode in a mini series where I will talk about each of the TV shows and movies of 2021.

The Eternals are trying to stop the Emergence from happening that would destroy the earth. Some of them feel that they should stop it, while others feel like the earth’s sacrifice is necessary for other worlds to be created.

Sersi, Ikaris, and Sprite find Ajak dead at her home. Sersi is shown what the Eternals are and how they’re created. Thena is diagnosed with Mahd W’yry. Gilgamesh dies protecting Thena. Sersi turns a deviant into a tree. The Eternals take their stance about what side they’re on. The backstory about how Ajak was killed, revealing that Ikaris is the villain. Makkari vs. Ikaris. Sersi stops the Emergence. Ikaris kills himself by flying into the sun.

Sersi: She was really attached to humans, she always had a great connection with them. She would always go out of the way to help them with things, and that’s something that Ikaris always admired about her. She wanted to be in a relationship with Dale, but she knew she couldn’t because they could’ve been summoned back home at any time by Arishem. After Ajak dies, she is chosen to lead the Eternals, and she’s not quite sure that she could lead them. She didn’t have the full support of everyone, some of them thought that Ikaris should’ve led them since he was deemed the “strongest”. Sersi eventually gained the trust of a few Eternals, and they gave her a pep talk to help build her confidence. She forgave Ikaris for lying to her all these years before he flew into the sun. Ikaris: He was playing both sides from the beginning, sometimes helping, sometimes leading the team away from finding the truth until he eventually revealed himself. He loved Sersi, but then when he left her after the Eternals “broke up”, he didn’t see her for a while and she moved on from him. He was then jealous to see her with another man. Ultimately, Sersi got the best of him and her team beat him in a fight and stopped the Emergence, and he felt like he had no purpose anymore and flew into the sun.

This movie was okay. Any movie is hard to enjoy when you have completely new characters in them that the audience doesn’t know yet. A lot of people hate on this movie, which I think is a little harsh. There were some good things about this movie, I loved Kingo and Makkari, they brought a lot of humor to it. The movie had some references to our characters, as well as things that we know in our world. I’m interested to see how and when they’re going to come back, as long as what role Starfox and Blade are going to play in it.

In episode 16 of Revengers: Friends from Work the Podcast, I will be discussing: Eternals.