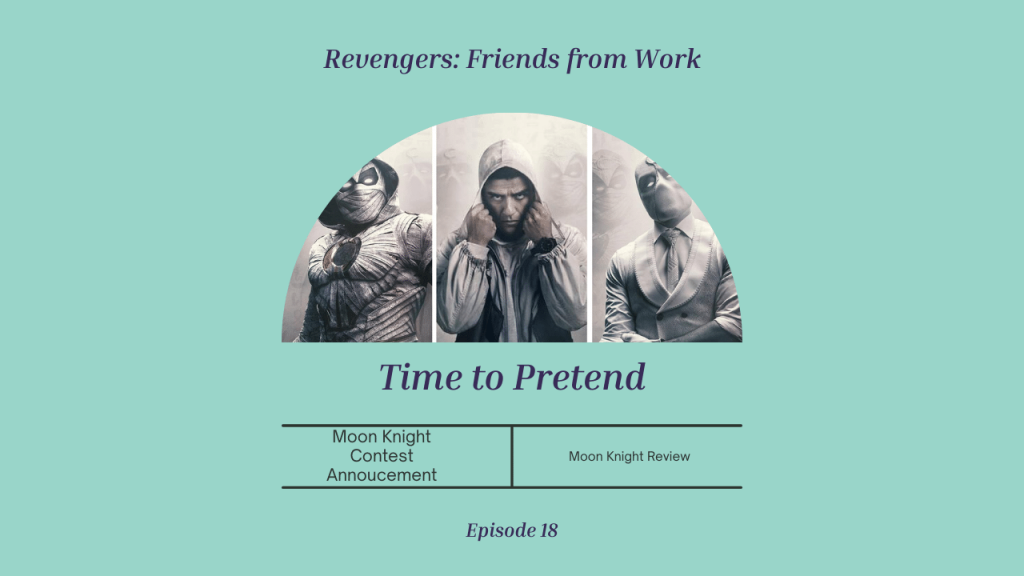 In this episode of Revengers: Friends from Work the Podcast, I will be discussing: Moon Knight.

Steven Grant and Marc Spector are going up against Arther Harrow to stop him from releasing the Egyptian goddess Ammit. It is also a journey to see if Steven and Marc can find a way to live together and be a team.

“Steven” killing Harrow’s henchmen (ep 1). Steven lets Marc take control of the body for the first time. Meeting Layla and learning about her and Marc’s backstory. Mr. Knight’s first appearance. Khonshu get’s imprisoned for turning back the night sky. Marc getting killed by Harrow. Viewing into the past to see Marc’s childhood leading up to meeting Khonshu and seeing how Steven was created. Steven being lost to the Duat. Ammit being released by Harrow. Marc and Steven are reunited to go back to their body. Layla becomes the Scarlet Scarab. Ammit gets imprisoned in Harrow’s body. We meet the third personality, Jake Lockley.

Steven Grant: He was just going about his normal life working at a gift shop and living with a sleep disorder. It wasn’t until he went to sleep and woke up in the middle of the field to hear Khonshu speaking to him, telling him to “surrender the body” did he realize that this was much more than a sleeping disorder. He sees his reflection in a mirror and starts talking to him, and he thinks that he is making it up in his mind. As he goes on this journey to try and stop Harrow, he starts to understand more of what’s happening. He doesn’t like Marc at first, as he’s thinking that he is taking over his body, when it was the opposite. He learns to appreciate Marc and is grateful that he is there. He learns the painful truth that he is not the original person in the body, and that Marc created him to be a happy side of him when times were bad. Steven learns how to work with Marc, and use both their strengths to beat Harrow. Marc Spector: He had a horrible childhood, but it wasn’t always that way. One decision completely changed his life, and helped make him the person that he is today. Between the death of his brother, and his mother totally disowning him for it, all Marc had was his father, and even he didn’t do that much for him. Marc’s mental health was being destroyed as a child, and he couldn’t take it anymore, so he created Steven. Steven was inspired by a movie that Marc liked, where the main character, Steven Grant, had no fear and was always there. He let Steven take over his body when he needed to, mostly to escape his mother’s wrath. Once he was older, he left home to start a new life, despite his father’s wishes for him to stay. Even though he despised his mother, he was devastated to hear that she died. Talk about Layla and Marc’s backstory of how and why they met. Marc realizes how much he needed Steven after he died, and he appreciated everything that he did for him for all those years. He finally learns how to work with Steven so that they can live their lives together.

I loved this show so much. It had action, love, sorrow, and humor all in one, and it was a great balance of all of them. I loved the connection that Steven and Marc had with each other, and they were adorable to watch together. Oscar Issac’s acting in this show was phenomenal and he needs to be recognized for it. I liked Ethan Hawke as the villain, I think he did a great job as Arther Harrow. I really enjoyed this different type of show with a whole new set of characters, and I really hope that we get a second season. I am very happy that they finally formally acknowledged Jake Lockley in the post credit scene, and I am very interested to see what part he’s going to play later.

In episode 18 of Revengers: Friends from Work the Podcast, I will be discussing: Moon Knight.