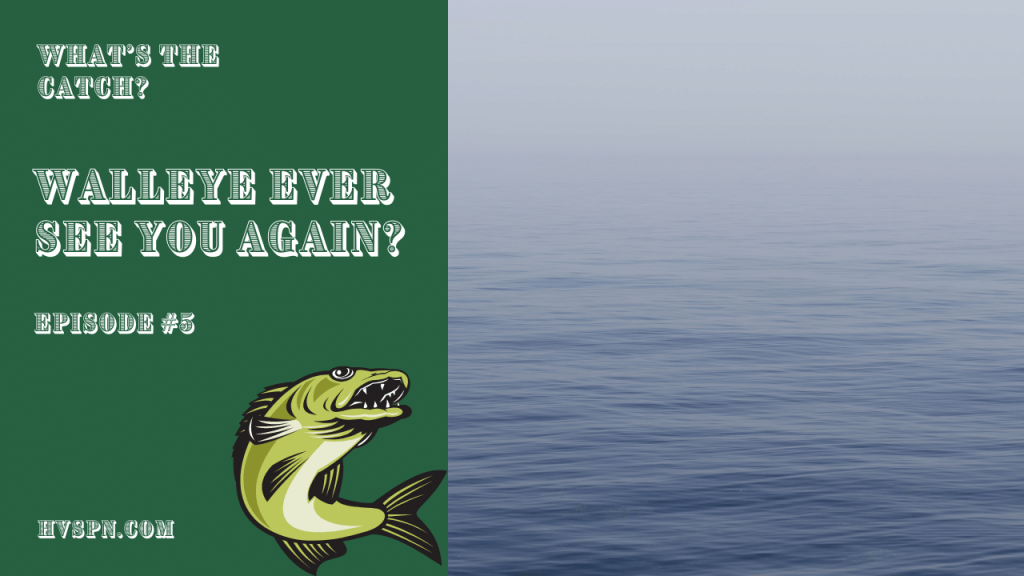 Walleye Ever See You Again?

You are listening to What’s The Catch? the podcast with your host Andrew Rowan.

In this episode of What’s The Catch? We’re gonna be talking about Walleye :what they are, where to find them, how to catch them, and why you should want to catch them.

The Walleye, also known as the yellow pike or yellow pickerel, is a freshwater fish native to the northern United States and almost all of Canada. They are gold and olive in color with a white underbelly. Their mouths are large with sharp teeth. Adult Walleye are usually gonna be between 2.5-3 feet long and weigh around 10-20 pounds. The average lifespan of a Walleye will typically be about 7 years.

Segment 2: Where can I find them?

They are native to Canada, the Great lakes, the Missouri River basin and the upper Mississippi River Basin, but have been able to be spread to the western and northeastern parts of the United States. These guys prefer cool, deep, and calm waters of rivers, lakes, and reservoirs. They are mostly nocturnal and during the day mostly take cover under logs and aquatic vegetation.so the prime time to be catching them is around dawn or at night. It seems to be going nowhere but up for walleye fishing in the state. Walleye fishing in New Jersey has been growing in popularity over the last couple of years.

Segment 3: How can I catch them? Segment 4: Why should I want to catch them?

Walleye are great fish for a couple reasons. One, they are pretty cool looking fish. They have this beautiful coloring to them and the fact they have teeth I feel gives them a lot of character compared to other species. Two, the fight they put up when reeling in is one of the best. They’re an aggressive fish and will hit your bait hard and will make your time worthwhile. Three, most of the places they’re native to are some really pretty locations. The areas around the great lakes, both big rivers, and canadian wilderness are breathtaking views make catching them great because even if you catch nothing, you got to see all those pretty nature and relax. Lastly four, they are considered one of the best tasting fish. Putting them in a beer batter and frying them is the most popular way to cook them.

About the author, Andrew