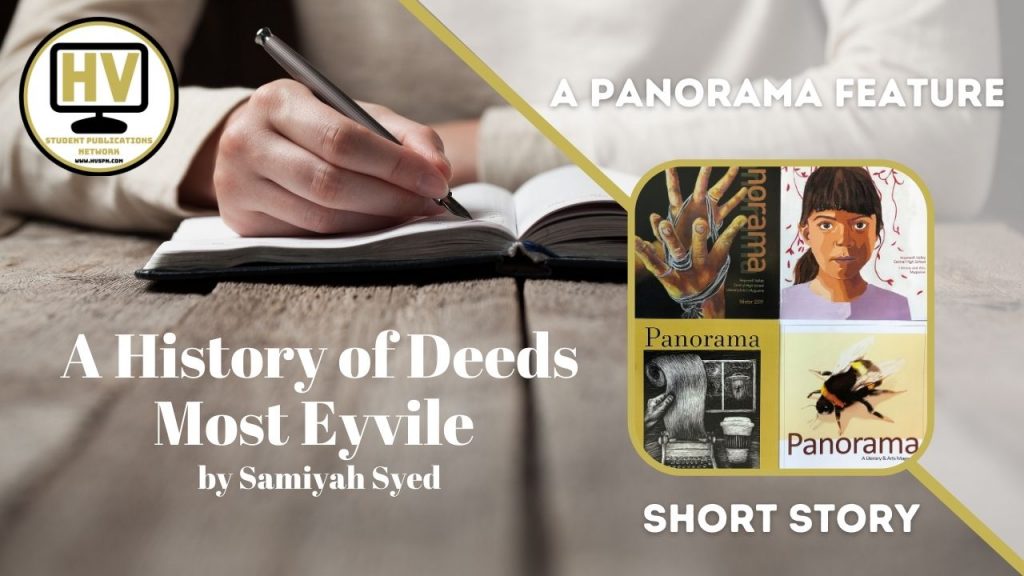 A History of Deeds Most Eyvile is a short story by Hopewell Valley Central High School sophomore Samiyah Syed & was published in Panorama, the literary arts magazine.

A History of Deeds Most Eyvile

It was a sunny morning, birds chirping, hell hounds barking, and our dear protagonist was late on her assignment.

For you see, my reader, Esejk is still a demon, and as all adult demons, she does indeed have a ‘quota’ if you will of cursed acts that she must complete, in a set time frame. Now, if any thoughts of typically demonic acts are crossing your mind, such as the taking of a soul before their time, or influencing people in positions of power to be corrupt and take bribes- well banish that thought from your mind! Demons really are given terrible rumors; Demons nowadays, are more in the business of being . . . well, of being petty. There are many clans, of demons, you see. The clan Esejk was born to, for example, the Ashfa demons, are more petty curses than anything else.

Of course, demons were once very vicious and all-around evil, in fact, the very first clan (and the one that gave demons a bad name all those years ago), was the Eyvile clan, hence the word ‘eyvile,’ though humans, of course, spelled it wrong the first time, and then refused to own up to their mistakes as they are wont to do. However, clans like the Ashfa are more prone to minor inconveniences if anything- you wanted to sleep in? Time to wake up earlier than any other day! -you wanted to be early to your Zoom call? Now you’re late, isn’t that just wonderful?

You may be wondering, “Well why then are people still so . . . evil?” And that’s a simple explanation, there. We, humans, like to differentiate between angels, and demons, and ourselves, for all being oh so different, but in reality, it is not so. We got the characteristics of both angels and the demons, and so we are neither completely evil, nor completely pure, yet somehow we aren’t nearly as nice looking as either of them. Must’ve lucked out, I suppose.

The ranks of the demons would have waned if they didn’t have human blood to supplement them; They too, go through the cycle of life, and they too die, though perhaps less often than humans, as they aren’t as fragile as a piece of already slightly cracked glass- or an iPhone if you will.

For this particular Ashfa demon in question, she is only half-demon, though as her mother died when she was young, she was raised with the demon upbringing along with her brother, who while being half-demon as well, is still a child, and like all children, an absolute menace leaving some people to wonder whether or not he was actually human at all.

Of course, if you’re a student of science, you’d know that two different races of creatures; so cats and dogs, for example, would not be able to procreate. This is true if you’re going by the human explanation, which is, like most things human, sadly wrong. Humans and many animals can’t very well procreate with other animals, simply because of the way they go about it. For demons though, they more or less bless the other being- similar to how the goddess Athena was rumored to have children, taking the hardness out of it, allowing them to have many half-demons, half-other.

Demon families, unlike human families also have one other glaring discrepancy, the popular idea of demons not being able to ‘feel,’ and for being emotionless, are probably hinged on this difference. Demons can most certainly feel, sometimes they even feel too greatly to the point where they have to numb their emotions, through their years and years of living. Demons, on the other hand, don’t feel love, or they do, just not romantically, though they are still caring towards the young and to family, and all of that. The only major difference this makes is in demon couples, who then instead of love, would come together based on respect, a little tidbit of information they probably didn’t teach you in school. (Actually, if any school had demon studies, I would be most surprised, what with the generally negative connotations of being interested in demons).

And while I have been blabbering on about demons, and their culture to you, my dear reader, our cursed Esejk here, is not concerned about being late on her demon quote of cursed activities. It’s a cursed activity in question that she is late on, namely her history assignment.

For Esejk may be a demon, but even demons are made to go to school.