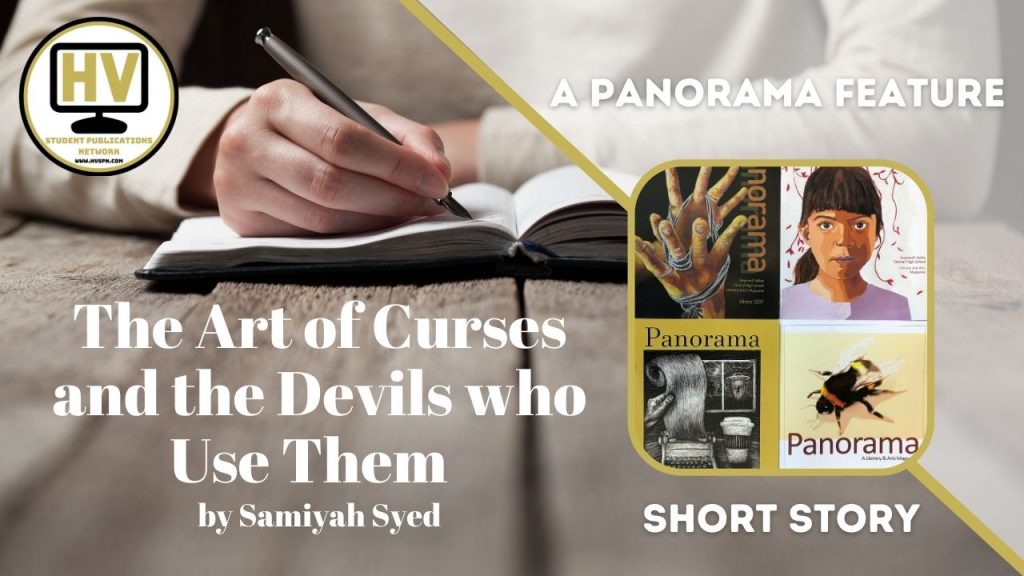 Cursing wasn’t a human invention- trust humans to take what other creatures did, and rebrand it as their own. Honestly, what could we expect, when they did it to their own- just look at the history of imperialism, or colonialism. Honestly, they think they’re ever so wonderful, all high and mighty with “we’re better than demons,” Well, newsflash, honey, ya ain’t! At least demons can admit to their mistakes, while humans here can’t even admit that they’re destroying the environment- Aaaaand you’re listening, wonderful. Could I implore you to please erase the last few moments of my lost composure from your memory? No? Fair.

Let’s get back to the matter at hand, shall we? Demon curses. Though they do swear as well, marvelous swears really, they’d fly over the head of any teachers seeking to put a bar of soap in your mouth while getting the point across. Demons are truly marvelous people- though I’m not certain that we can in actuality refer to them as such, though we seem to consider that to say that something with intelligence is not a person would be to demonize them. Well, they are demons so I do believe that they’d be fine with us demonizing them, though I suppose by the time they let us know how they feel the damage is done. Oh well. Similar to a test that you submit before you can check your work. By the time you find out the errors . . . well it’s too late for you. Let’s say that they have souls, and therefore feel a wide and colorful variety of emotions, most of all love.

For that is quite a fun bit of knowledge on demons, is it not? Many people seem to think that, “You coldhearted demon!” is an adequate curse, most notably to terrible people, Christopher Columbus for one. But see, this isn’t wholly accurate, for demons feel, often too much. It’s just that over time, of seeing the very worst of humanity (Looking at you there, Chris), they’ve grown insensitive to these matters- I mean, it can happen to the best of us, even; Lose enough people, see some truly horrendous acts of mankind- I mean, who puts tomatoes in salad??? They have to be nuts. These terrible things just pile up and hurt, and if you care about it all, you can’t really get far in the business- and for demons that means not getting far in life.

Though that does bring up quite an interesting debate, if there are demon realms connected to Earth, and demons can be born and die then where do they- And we’re on a timer folks, so let’s get back to the subject!

What was the subject again? Oh, I see, curses! Demons have quite a large variety of curses, though the most amazing are the ones without any real harm behind them, just enough to cause confusion, the most innocent looking of the bunch. But don’t let this fool you- they may not have magical intent behind them, but oh boy can they hurt.

And what is the most potent of these curses- the demon version of, well you know that one that if you were to say in the presence of any parent they’d gasp and clutch their chest and look at you like you fed their firstborn to the Kraken under the sea (The Kraken is a story for another day, but let’s just say that he is very self-conscious, and just wants friends. He’s quite nice, and if you’re close to him, quite a blast at game night.) or some other equally heinous act, like bringing tomato salad to a party and forcing everyone to eat it, knowing they simply cannot refuse due to social conventions. The demonic version of this oh so frowned upon word, is the simple, “Bless you.”

You may be wondering if I’ve hit my head against something. The answer to that, is a resounding yes, but that is neither here nor there, and I assure you that I am not jesting, though I am always up for a good laugh or two. For demons, the simply worst thing would be to be blessed, they would, in short, be forced to go against their worldly duties, and the very reason that they were created. And also, while they are all good about being nice- honestly, who steals candy from a baby, or becomes a world leader only to lie to their people, come on they do have standards- the general aesthetics of Up There (for those of you who want directions, just follow the sounds of singing angels and the scent of freshly baked bread, honestly how pretentious can you get?), are just far too out of their realm. Pure white, sunshine yellow? Oh heaven no. I may not be a demon, (though there are some who would like to protest that, I’ll kindly say bless you to them) though even I agree that yellow is a few miles down the road of, “Oh honey, you didn’t.”

And that, my dear readers, is the tea on demon curses. Though a good “Go to heaven!” is also quite widely cherished by many. And now I bid you adieu, and the worst of curses to show you on your way!