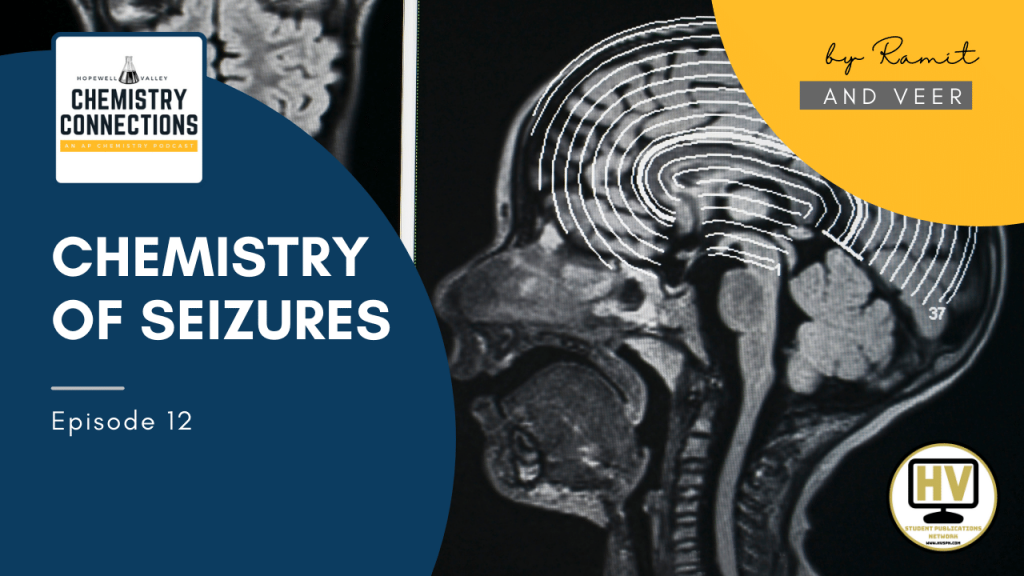 Our names are Veer Davda and Ramit Dasika, this is episode number 12 of Chemistry Connections and we will be talking about seizures. Seizures are really scary and for a lot of people it can strike at any time, if you have a seizure disorder, by just playing a video-game or watching T.V can cause a seizure to strike at any moment. What we try to discover in this episode is what the chemistry behind a seizure is and the chemical processes behind the seizure.

1. So- What is a Seizure? A seizure is a symptom in which there is a disturbance in the brain. It leads to changes in mood, behavior, and level of consciousness in the day. It can change your behavior, feelings, and level of responsiveness every minute. During a seizure, there is a sudden intense burst of electricity that disrupts how the brain usually works. This activity can happen on one small part of the brain and last for just a couple of seconds, or it can spread right across the brain and keep going for many minutes.

There are also many causes of that burst of electricity, like Chemical weapons such as sarin and VX, and pesticides such as parathion and carbaryl cause hyperstimulation of cholinergic receptors and an increase in excitatory neurotransmission.

Now, let’s take a look at the Chemistry behind Seizures. Ionic Substances or ionic compounds form from ions that are attached together with ionic bonding, which is based on the attraction between the positively charged cation and negatively charged anion. When ionic substances dissolve in water and it becomes a solution, the ionic bonding is broken and the compound dissociates to produce positive and negative ions or cations and anions. These ions that are produced are electrolytes. They are called electrolytes because according to their charge, they will be negatively charged ions(anion) or positively charged ions(cations). They can be ionic or covalent compounds. If it is an ionic compound, the compound of a nonmetal and a metal dissociate to yield its appropriate ions, which are electrolytes. If it is a covalent compound, the covalent bonding between both nonmetals are broken and the negatively charged ions are produced. In Epilepsy, there is an imbalance in the number of electrolytes as it causes sodium disorders (especially hyponatremia), hypocalcemia, and hypomagnesemia. The immediate correction of electrolyte imbalances is crucial in permanent brain damage and drastic consequences due to epilepsy. Medical Conditions like Dehydration can impact electrolyte imbalance.

What Interests us in this Topic

What is this Important to us?

What we try to discover in this episode is what the chemistry behind a seizure is and the chemical processes behind the seizure.