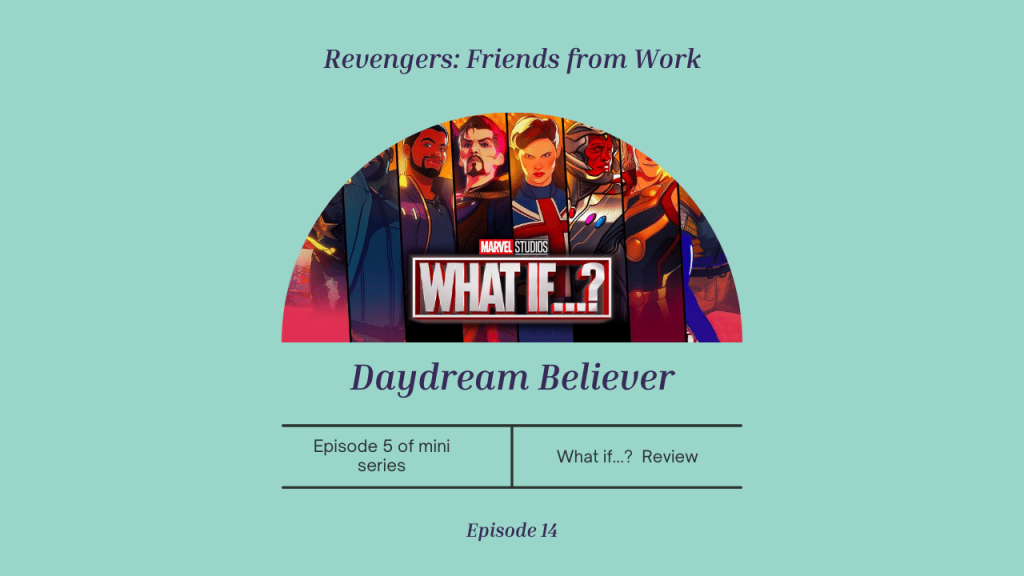 In this episode of Revengers: Friends from Work the Podcast, I will be discussing: “What if…?”. This is the fifth episode in a mini series where I will talk about each of the TV shows and movies of 2021.

The series explores alternate timelines in the multiverse that show what would happen if major moments in the MCU occurred differently, and how it would affect our heroes, their worlds, and even their universes. In the two part finale episodes, we see what would happen if the Watcher broke his oath, and interfered with the multiverse and brought heroes together from different universes to take down Ultron.

Sinister Strange being trapped in his own universe with nothing left. Thor and Loki being happy to see each other. Ultron finding the Watcher and going all throughout the multiverse. Ultron and Killmonger getting trapped into their own universe to forever be at war.

The Watcher: He swore an oath to not interfere with any events, even when he was really tempted to help save the universe, he didn’t. It wasn’t until Ultron found him that he had to interfere. He hated asking Stephen for help, but he felt that he had no choice. Sinister Strange: he was willing to do anything to save Christine, he tried countless times to try and save her, but he kept failing over and over again. Eventually, the Ancient One told him that her death was an absolute point in time, that nothing he could do would change it. After she split the timeline to have 2 Strange’s be on the same timeline, they fought, and Sinister Strange was imprisoned in what was left of his universe.

This was my least favorite show in 2021, it wasn’t bad, but at the time it came out, it didn’t feel like it had a point to it. Now it’s canon in the MCU, and I’m very excited to see Sinister Strange make a comeback, and see how the events of this show and No Way Home have to do to affect the Multiverse of Madness.

In episode 14 of Revengers: Friends from Work the Podcast, I will be discussing: “What if…?”.