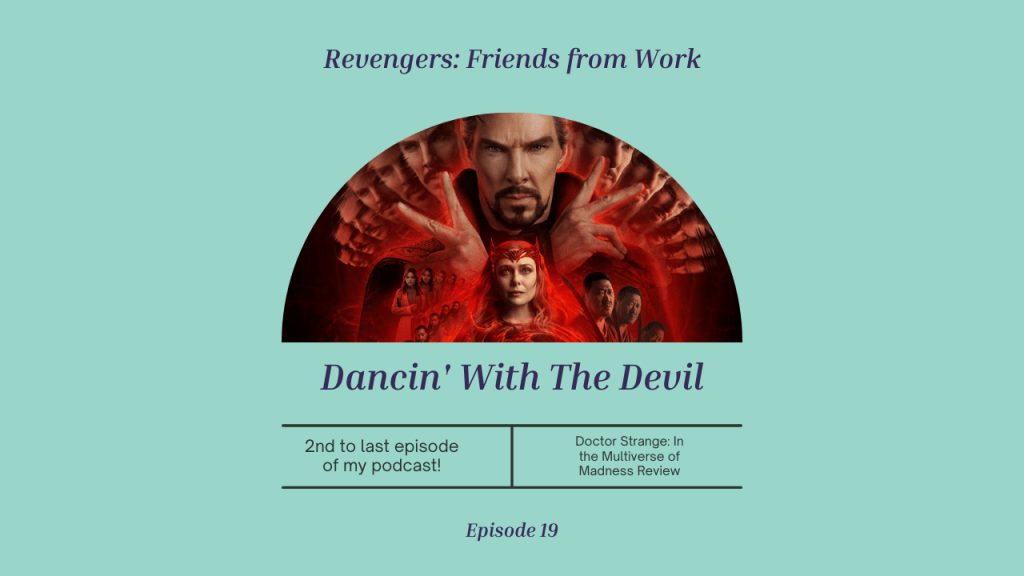 Episode #19: Dancin’ With the Devil

In this episode of Revengers: Friends from Work the Podcast, I will be discussing: Doctor Strange In the Multiverse of Madness. There will be spoilers for the movie so if you haven’t seen it yet, don’t listen until after you’ve seen the movie.

Wanda is trying to get to a universe where she can be with her kids again by stealing America Chavez’s powers. Doctor Strange is trying to protect America from being killed by Wanda, and gets sent to different universes to try and get variants to help him stop Wanda.

America getting betrayed by Protector Strange. Stephen sees Christine being married to someone else. Wanda shows Strange how the Darkhold has corrupted her. Wanda attacking Kamar-Taj. Seeing the past memories of the other Strange on that Earth. Seeing how America first used her powers. Strange meeting the Illuminati and warning them about the threat that Wanda poses. Wanda dream-walks and possesses a variant of herself to find America. The variant of Wanda killing the Illuminati. Strange, Christine, and America find the book to stop Wanda. Strange uses the Darkhold to possess a dead variant of himself. America gets control over her powers and shows Wanda what would happen if she tried to see her kids in another universe. Wanda destroys the Darkhold in every universe and destroys the throne. Strange being corrupted by the Darkhold by the end of the movie and meeting Clea.

Doctor Strange: In the beginning of the movie, he attends Christine’s wedding, visibly upset that she is with another man. When he talks to Christine, she asks him if he’s happy, and he lies and says he is. He tells her that he still loves her and asks what he did wrong, and Christine told him that it was never going to work out between the two of them. Stephen always had to be the one “holding the knife”. While learning about his other variants, he learns that all Stephen’s act and behave the same ways, the same way he does. A variant of Christine tells him that they didn’t get together in their universe, and that he should just let go of her. He tells her that he’s scared, and she tells him that he doesn’t have to be. When it came down to whether or not Stephen was going to take America’s powers, he stopped being afraid, and he handed over control to America. Wanda: She was being corrupted by the Darkhold to make her believe that her kids were real and that she could go to another universe to be with them. She said that the hex was the easy part, not the lying. She wanted America’s powers, and once she had them, Stephen would never see her again. After Stephen was reluctant to hand her over, Wanda fully embraced who she was, and told him that it would be the Scarlet Witch coming after her. She tried to be reasonable with them, but once she saw that they weren’t going to back down, she used her full power to easily take down Kamar-Taj. She kept denying that she didn’t want people to get hurt, but she consistently kept killing people. Once America finally showed her how her kids reacted seeing her, she finally understood that she couldn’t be with them. Plus, the other variant told her that they will be loved. After Wanda understood how much pain she caused being corrupted by the Darkhold, she destroyed it, not wanting anyone to be tempted by it again.

I really liked this movie. It had a lot of horror elements that I really enjoyed, and I was constantly guessing what was going to happen next. Elizabeth Olsen absolutely killed it in this movie, her acting was phenomenal. I think the major reason that some people aren’t happy with this movie is because the advertising for this movie made it out to be something totally different than what the actual movie was. I also think that we were going to see a lot more tie-ins to past shows and movies like What if…? That we just didn’t get.

In episode 19 of Revengers: Friends from Work the Podcast, I will be discussing: Doctor Strange In the Multiverse of Madness.